Two days ago I noticed a piece of paper flapping in the bushes outside my workplace in an old industrial area of Melbourne. I work in a new concrete and glass building, built on the spot where a row of workers' cottages used to be, and surrounded by factories and warehouses - but not for much longer, as they're all in the process of being knocked down.

The piece of paper was a blank invoice from the 1940s, with a beautiful letterhead: 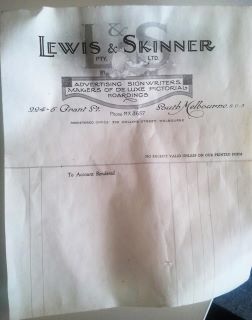 I looked and saw other pieces of paper: job sheets, quotations, sketches. All from the same era, and the same signwriting company. As I picked them up I saw they were blowing in from the fenced-off end of the street, where demolition was underway, next to a railway line that will soon have a track added. 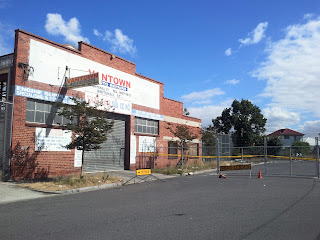 The gate was unlocked so I went in and collected more pieces of paper until the site manager drove in, saw me and told me to leave. I waited until he left, then went back (the gate was still unlocked). In the bushes on the pavement next to the railway line, I found a tattered, bound book labelled 'Incoming Correspondence' that contained letters, telegrams, statements and other documents: 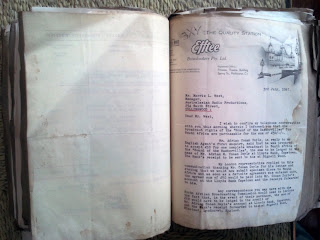 The book contains the 1947 and 1948 correspondence of a company called Australasian Radio Productions, producers of radio serials during the 'golden era' of radio in Australia (before the advent of television, I found out later, Melbourne was a centre of radio production). The co-owner and director of ARP was Morris West. West would later become Australia's most internationally successful author with 70 million book sold. The book contains a wealth of material including correspondence with writers about serial plots, negotiations with radio stations and the Australian Performing Rights Association, memos to other ARP staff and royalty statements from West's first book, Moon in my Pocket.

Now excited, I noticed that these scattered papers seemed to originate from the fenced-off demolition site next to the street, which until recently had been a Vietnamese-owned mechanic business that I  passed every morning after parking my car. So after work, and after the blokes in hard hats had left, I went back, jumped over the fence and found a large pile of damp, musty papers unceremoniously dumped on the concrete and exposed to the elements: 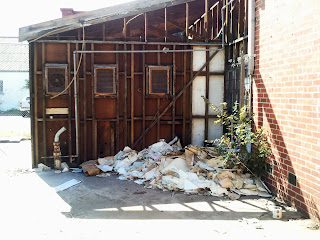 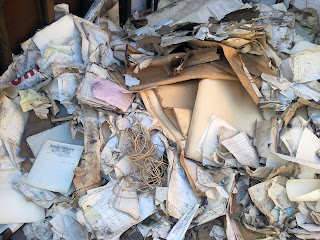 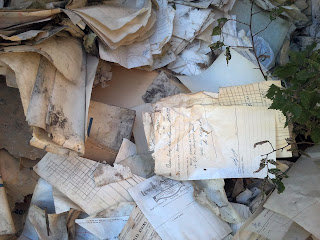 For the next two hours I rummaged through the pile. It mainly contained the records of the Lewis and Skinner signwriting company back to the 1920s, but also contained other ARP records, in various states of decay.

By the time I sneaked out in the dusk (and was seen leaving by the security guard on patrol) I'd found the outgoing ARP correspondence book, invoices and a pile of other loose correspondence that spanned from 1946 until 1954, when, I've found out, West sold the company.

So the last few nights I've been reading and sorting, trying to dry out the damp and grubby archive, and in one case moving papers to new folders, for obvious reasons: 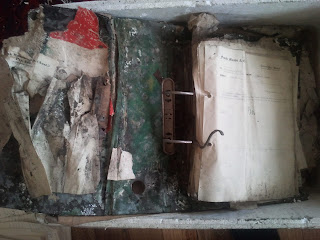 The more I delve, the more I find. And the web is filling in some missing bits. So far I've read about things like:
It's an amazing treasure trove that has turned up unannounced, and curiously on the back of me finishing a PhD about the role of the internet and narrative in people restablishing a sense of belonging, in an age where everything is subject to change and being thrown to the winds. I'm still trying to work out what to do with all this. Do a feature article? Documentary? Draw it into the orbit of my uni work? Take the books to the State Library or the Aust Film and TV Archives? Get in touch with West's biographer? All or some of these? As a first step, I'll need to read some of West's work, and more about him in his biography. A friend and publisher has described the find as a gift, or a sign. He says it points to a theme:  the supposed death of the book in these digital times (I had been talking to him about doing a book based on the PhD).

I'm still figuring it all out.