There's a large sign hidden behind the left wall of this yellow terrace house on Nicholson Street, North Fitzroy:

It's a large blue Indian Root Pills sign taking up the entire wall, and similar to the recently uncovered one just one block south on the same street. Here's a pic, taken from my post on this year's uncovering: http://findingtheradiobook.blogspot.com.au/2013/03/spectacular-ghost-sign-uncovering-in.html: 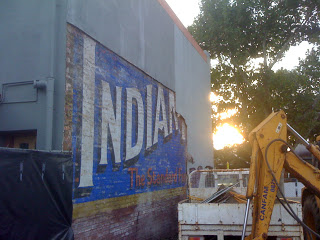 How do I know the hidden sign is there? A previous uncovering from 2001, photographed by Ian Harrison Hill. The photo was bought by the State Library of Victoria, which describes it thus:

Note: it's actually in North Fitzroy, not North Carlton - that's the other side of the street.

I can't show the photo of the 2001 uncovering because it's under copyright. But you can see the photo online here:

The company behind Indian Root Pills must have had one helluva marketing budget in its heyday!